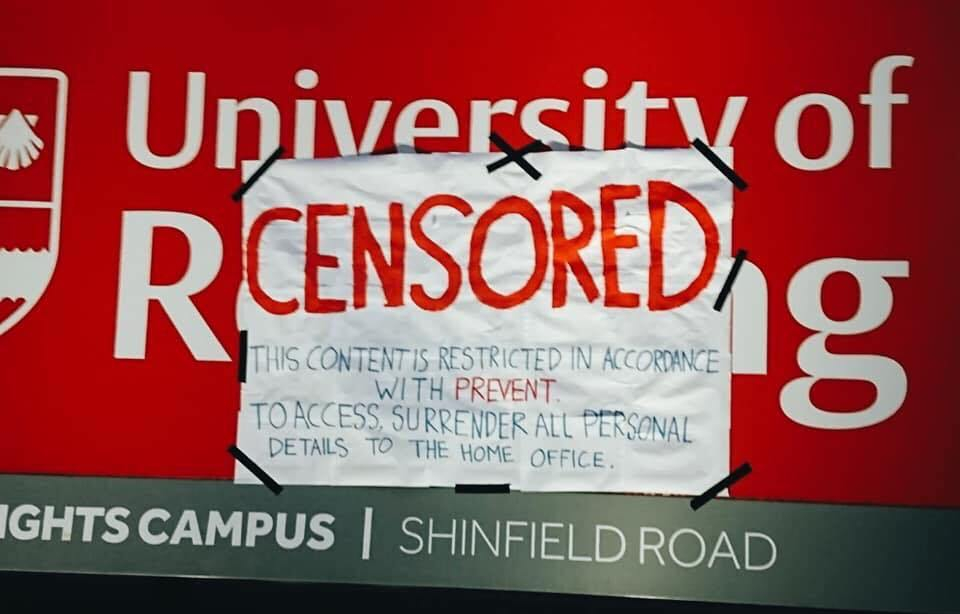 Against Prevent – For the Right to Organise, Protest and Speak on Campus!

By University of Reading Communist and Anarchist Society

Students at the University of Reading have been told to take care when reading an essay by the late Professor Norman Geras, in order to avoid falling foul of Prevent.

An academic journal has been flagged as sensitive under the Prevent programme, and the University has warned students not to access it on personal devices. This academic journal is an ‘essential reading’ for the ‘Justice and Injustice’ politics module titled ‘Our Morals: The Ethics of Revolution’.

Fahid Qurashi, a Prevent expert of Staffordshire University, argued that this type of anti-terrorism legislation is “being applied far beyond its purview”. Dr Waqas Tufail, a senior lecturer in social sciences at Leeds Beckett University and the co-author of Just Yorkshire, an initiative that promotes racial justice, described the Prevent scheme as “built upon a foundation of Islamophobia and racism”, expressing huge concerns on the tactics of Prevent. Furthermore, he claimed that “academics – both Muslim and non-Muslim – were resorting to self-censorship when discussing topics around Islam”.

To add, an NUS (National Union of Students) activist in York has told researchers that a Prevent officer had demanded a list of all the names who were associated with the University’s Islamic society.

Prevent’s invasion of academia and society is clearly racially motivated. Prevent does invade radical left wing spaces and platforms, as seen in the case of the University of Reading, but all of these attempts to monitor people are exacerbated if one is BAME or a Muslim.

It is important that we do not stay silent at a time of injustice. We demand to uphold the right to organise, speak and protest. It is extremely important to engage with radical and subversive ideas within University grounds in order to challenge the University as an institution, and its place within capitalism, without being alienated as terrorists or fuelling students with fear, forcing critical students to self-censor.

We demand to end collaboration with Prevent and to not allow police on campus without SU permission. Prevent has ambiguous definitions of what terrorism is, allowing it to use and abuse its power for its own racially charged political motives. Police on campuses would allow the state to have the power and ability to invade critically organising movements, thus again reaffirming the University as institutionally controlled academia.