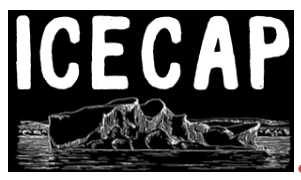 ICECAP – Youth Strike for Climate May 2019 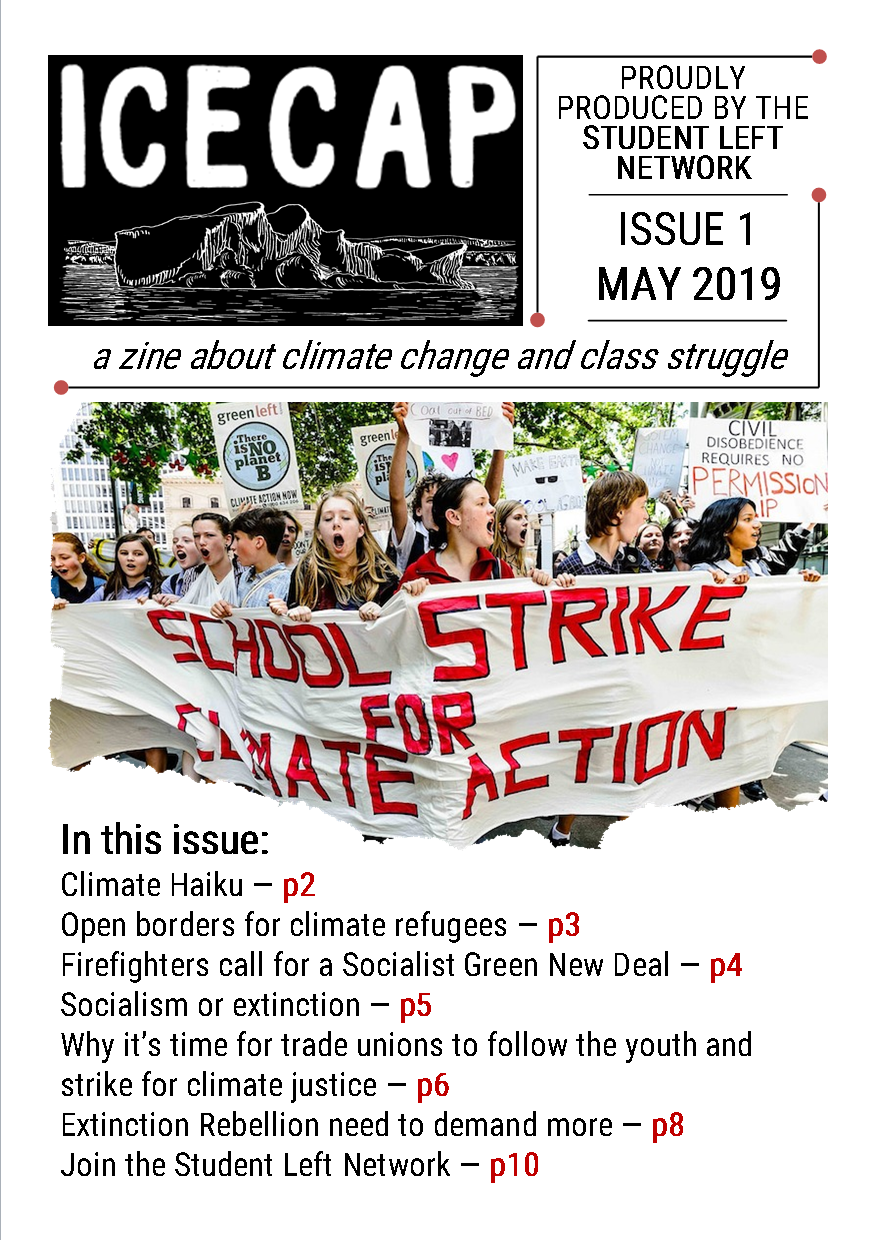 You can read and print copies here, ready for May’s youth strike for climate.

Read the articles below:

While we are in the midst of a refugee crisis, with millions of people being displaced from their homes either due to war, persecution, or conflict, climate change continues to loom over with the threat of a global catastrophe. A warming planet will bring with it rising sea levels along with huge impacts to agriculture threatening food scarcity. Like all negative impacts of capitalism, this will disproportionately affect the poorest.

This will lead us into another crisis of climate refugees and yet the millions that will be displaced from their homes will not be offered the same international protections as other refugees, and may be sent back to the catastrophe they’ll be fleeing from and may not be afforded fair asylum procedures.

Everyday we move closer to reaching a point of no return for climate change. Between the lobbies of the oil industry and growing climate denial, the perpetrators of climate change continue to be successful in their pursuit of profit over all else. We must keep pushing for climate justice. The far-right is demanding fortress nations of closed borders to all migrants, therefore it is vital that freedom of movement becomes a priority for the environmental movement. We cannot allow the people of developing nations to become collateral to damages that our developed nations continue to cause. 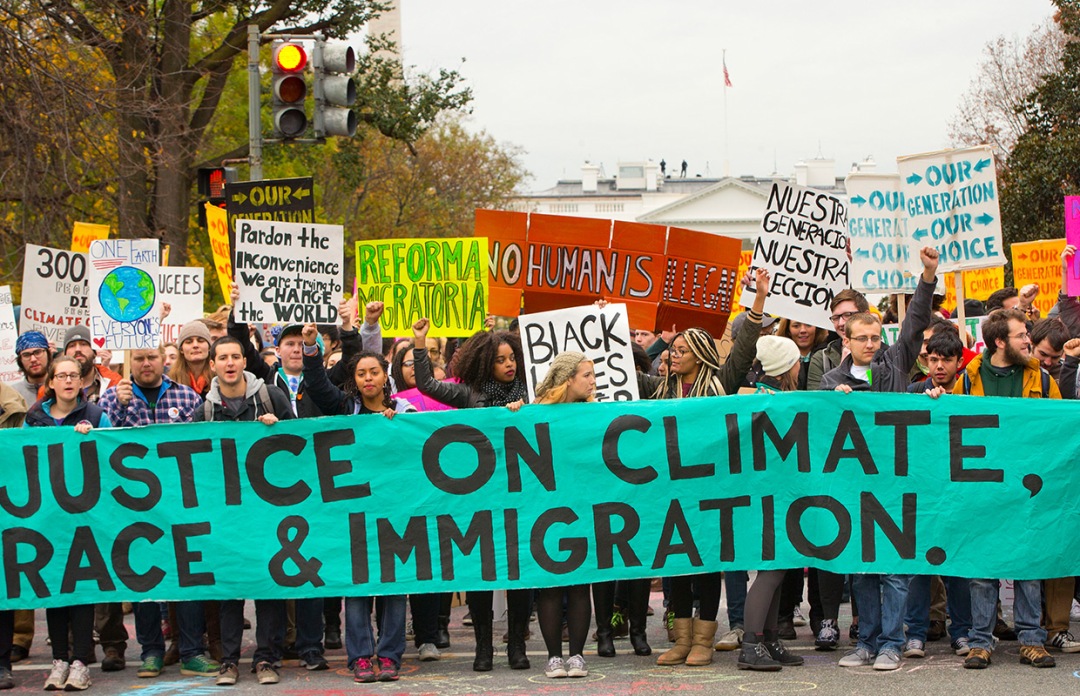 This motion passed at the Fire Brigades Union’s Conference in Blackpool in May. They will be campaigning for the Labour Party to adopt the same policy!

Conference notes and congratulates the climate change protests that took place on the 12th and 13th May 2019 across Britain and internationally. […]

These protests have clearly highlighted the urgency of the situation and the need for action.

Conference also notes the youth climate strikers, and welcome their commitment to working with trade unions on this matter. We should develop links and discussion with them, nationally and locally, actively looking for opportunities to coordinate our campaigning, demonstrations and action.

The labour movement needs to campaign on this matter in workplaces, industries and in government both in the UK and internationally.

Conference believes that a Socialist Green New Deal is required to shift power from capital into the hands of workers and communities to address this matter, and should include:

One million species are threatened with extinction, 23% of all land has suffered degradation, hundreds of millions of people are at greater risk of floods and hurricanes due to loss of coastal habitats, and a huge proportion of global food production is at risk due to pollinator loss.

A 6 May report by the Intergovernmental Science-Policy Platform on Biodiversity and Ecosystem Services shows “unprecedented” declines in biodiversity and ecosystem health, “accelerating” rates of species extinction, and “insufficient” current global response.

For more sustainable future policies, it calls for “the evolution of global financial and economic systems to build a global sustainable economy, steering away from the current limited paradigm of economic growth.”

Today, globally, small numbers of individuals – the ruling class — own and control companies in pursuit of their own profit, with the work that actually makes them function being performed, for the most part, by the rest of us – the working class. This how most industries are run, and most services and goods are produced, and it shapes the functioning of our society. The ruling class, through accumulating wealth, has incredible power, not just within this or that company, but over governments and more widely. This power helps them protect their vested interests.

Individual capitalists’ endless pursuits of profit, collectively constitute unlimited pursuit of economic growth, to the detriment of humanity and the environment.

Limiting harm to biodiversity and ecosystems requires us to limit the short-term profits of the agriculture and food industries; largely end the meat, fish, and fossil fuel industries; dedicate large swathes of land to promoting these aims which could otherwise be used to accrue private wealth; and prevent or transform many other activities which could be highly lucrative.

On top of this, to fund such transformations, we will need to take control of a lot — or all — of the wealth of the rich and in the banks. This can and would all be done by economies and societies run genuinely democratically by workers and communities, and organised rationally in the interest of humanity as a whole. To make such limits happen from the world as we find it in 2019, requires, at the very least, serious confrontations with capital, if not the revolutionary overthrow of capitalism.

The Green New Deal calls for an economic revolution to put people and planet before profit. In contrast many unions are still supporting environmentally destructive industries. Now is the time for worker-youth solidarity to demand climate and social justice.

Our generation knows what it’s like to grow up under austerity, with 1 in 3 children in poverty. We know that it is working people who bare the brunt of crises caused by a minority in power. We have no reason to believe that the far more extreme climate crisis will play out any differently.

Which makes the forthcoming catastrophe so terrifying. The climate crisis being created by our current system will bring food shortages, devastating natural disasters, and will displace hundreds of millions. And though this crisis will affect everyone, it will not affect everyone equally. Those who have already suffered most due to neoliberalism, who have contributed the least to emissions, are suffering the most catastrophic impacts of our damaged climate.

The youth strikes show our awareness that we, the future working class, will bear the burden of this crisis, and that we must therefore collectively mobilise now to avoid that crisis. In contrast, the majority of trade unions are staying fatally silent and continue with a destructively short-sighted climate policy. It is no wonder that youth membership in unions is at an all time low when union leaderships prop up aviation expansion, fracking, and gas power stations, industries that send our generation’s future up in flames.

The Green New Deal – for which we youth strikers are calling – demands a massive reduction in social and economic inequalities. This is a plan that prioritises investment in retraining for workers in high carbon sectors. We demand a worker-led just transition through which not one job is lost; instead the economic revolution will bring millions of secure jobs. This is exactly what trade unions should be calling for.

It has been left to the youth to protect workers’ rights from the climate catastrophe in which many union leaderships are complicit. We now call on the unions for the following:

Our struggles are the same. When unions go on strike for a sustainable future for workers, the youth strikers will be there in solidarity. We can all recognise the dreadful impact of this government’s rule, but so far it has been left to the youth to oppose it. Through worker-youth solidarity we have the chance to create a truly transformative movement to push for a Green New Deal and deliver climate and social justice.

Find out more about the UK Student Climate Network: www.ukscn.org

Since launching in October 2018, Extinction Rebellion (XR) have been able to mobilise huge numbers to participate in a strategy of civil disobedience directed, mainly, at politicians to take real action on the climate crisis. The tripartite system of fossil fuel capital, state power and neo-colonialism form an immense and complex enemy that will require a climate movement that is equal to or greater than this system to tear it down. XR should have our immediate base-level support as a potentially positive part of this movement. In particular, the amount of effort that has been put in to reach and inspire so many people to act over climate destruction is something for us all in the climate movement to learn from.

Despite this, there has rightfully been plenty of well-considered critiques of XR’s strategy and politics since their inception. It’s been worthwhile to focus on the politics of the group at a national scale in more detail and the links between their politics and their strategy. For all their good work in this area, their approach to mass mobilisation is also wherein lies a significant part of the problem and can provide a lesson for large scale movement building.

The main criticism is that their official statements that the root of the climate crisis is located in capitalism. Many members of XR may be socialists, however these views do not explicitly appear anywhere in the group’s strategy, principles or demands.

Instead, they call for vague ‘change’. This is great for mobilising large amounts of people, but who are you attracting and what are the consequences of this? The use of abstract empty signifiers like ‘change’ means that anybody can attach their own interests to those words. People from across all classes and with different ideas of how they want our political and economic systems to look like, but who all share some common objection to climate change, are attracted to the XR demand of ‘change’. The obvious problems with this is that it 1) allows bourgeois elements within XR to take the group in a direction that they want, against the interests of those worst affected by climate change in Third World countries, and 2) leaves the group as a whole more open to being assimilated by the capitalist apparatus.

When your strategy involves volunteering to get arrested and cooperating with police, this also affects the racial and social character of the movement and further brings into question who exactly you’re attracting to your group. Can XR ever be part of an anti-racist, working class climate movement with these politics and tactics?

XR’s strategy of trying to get arrested as a spectacle aims to capture the sympathy of the wider public, politicians and even the police themselves. They want to be seen as passionate ordinary people who care so much about the environment that they’re willing to get arrested to save it. This tactic relies on the people in XR predominantly being white. There would be no such sympathy for BAME people in the same situation. It is a serious level of exclusivity when the entire approach of the groups fails with a certain racial character.

This cooperation with the police also demonstrates an absurd amount of privilege. Anybody who is aware of the cruelty and violence of prisons, police and state law would never volunteer themselves into the back of a police van, and it is incredibly irresponsible for the organisers in XR to lead a mass mobilisation of people down this road.

With the IPCC reporting that we need to keep global temperature rises below 1.5°C by 2030 to avoid runaway climate catastrophe, it is crucial that we don’t allow the bourgeoisie to creep into our groups and that we have an unapologetically communist climate movement. If we stick with capitalism, we are choosing to let millions of people die from climate change, and as the climate crisis intensifies, so will the grip of the capitalist ruling class who will react with extreme measures against the world’s most vulnerable to save only themselves and the capitalist system.

That XR have thousands of people taking to the streets is impressive. If they were to get the same number of people with sharp class consciousness taking part in an anti-racist, working class climate movement that calls for communist solutions to climate change, that would be something really exciting.

Write for the next issue! Send ideas to:

Get involved in the Student Left Network here!