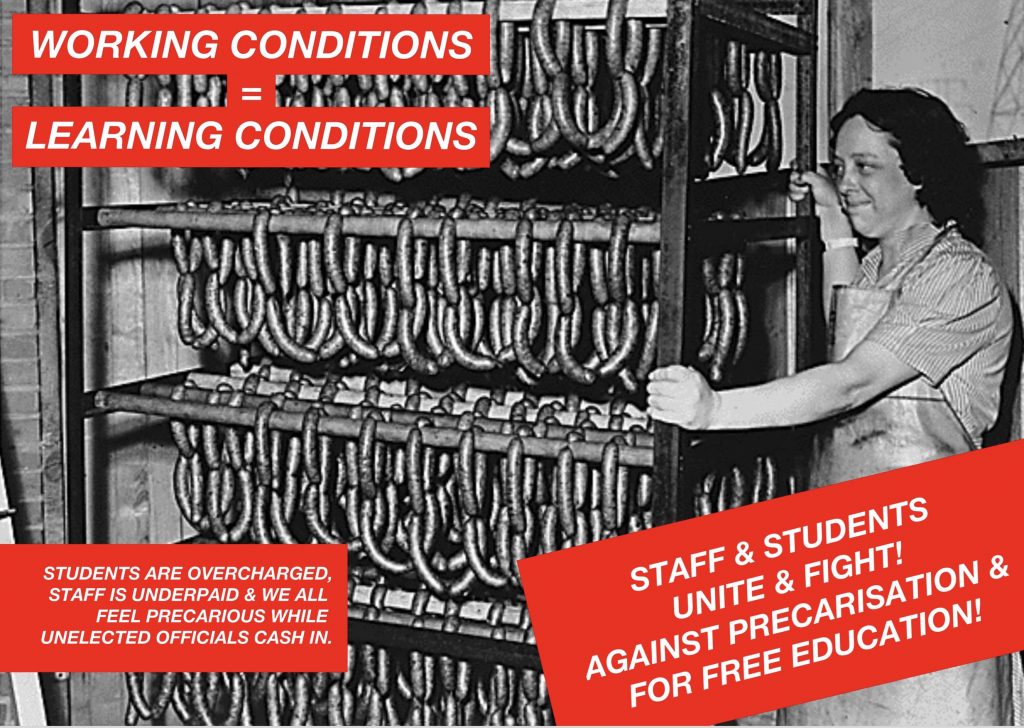 Students and Student Unions should get behind the planned strike action by UCU members. The UCU has called this strike because they feel they have no other option and because there has been a dramatic deterioration in their working conditions over the last ten years of austerity.

Very soon after the announcement of the strike two student responses were made which were centred on students rather than staff.

Firstly a petition was launched at Bangor University calling for reimbursement of fees. Secondly the officers of Royal Holloway Student Union organised a “referendum” to find out what students think about the dispute and on the grounds that this is the only democratic way to represent the student voice.

The petition at Bangor was launched on the basis of getting support for the UCU and putting pressure on the University to settle the dispute. (In the pension strikes last year a number of institutions were forced to pay compensation to students.)

But is this the best way of getting VCs to listen to the student voice or the best way to channel student anger? Notwithstanding the good intentions of the petition I don’t think so.

The petition brings in students in their role as consumers, rather than learners. It makes the dispute into a problem for students, rather than focusing on the justice of claims being made by staff. It asks students to think about their interests first and before those of workers. It therefore implicitly and potentially sets up competing interests between students and workers.

The referendum at Royal Holloway is wrong on five counts.

The officers at Royal Holloway are elected by the student body. They have been voted to take all kinds of decisions including political ones. As such they can and should express their support for the strike – if they do indeed support it. This is too important a matter for them to be neutral about. If they don’t support the strike they should be honest about that to the people who elected them!

Secondly, even a ‘preferendum’ (a referendum with multiple choices), is an atomised vote after minimal exposure to online information. This is not good way to decide on complex issues. Such issues often require exposure to real life debate and discussion and there will be none of that in this vote.

Thirdly will the people most affected by this decision, the staff themselves, even be given a platform by the SU to put their case to students?

Fourthly this is a way of students making this strike all about them and when someone else is fighting for education on your behalf that’s really not the best way to win. The best way to win is to back the people who are fighting!

Lastly, throwing doubt on the justice of the UCU’s claim, as a preferendum does is short sighted. If student unions show some basic solidarity to staff this year by having some faith in their very serious decision to go on strike, next year Student Unions can ask for, and expect staff to back them in their campaigns. Or does the SU expect the UCU to organise a members’ ballot before backing them in their claims for better student services?

This strike is about improving the quality of education but the best way to get that is for students to write to Uni managers, demonstrate and attend picket lines. The more students get out and show their support the more pressure they will bring on the employers to settle. As the old labour movement saying goes – the longer the picket line the shorter the strike!

We have to focus on the bigger picture and increase understanding of what all the cuts and reforms have done to higher education and now this has led up to this strike. Students and staff do not have competing interests. We have seen cuts in wages but also the introduction of fees. We have seen increased workload but also overcrowded classes. If students join with the UCU we can push back against all of this.

Together we are stronger!